Update from Meg: calling out the University's gender imbalance 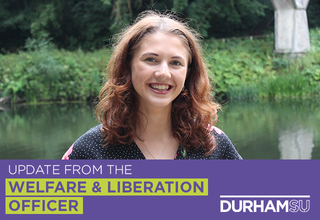 Durham University employs 235 men who it pays over £60,000. But it only employees 60 women in that same pay bracket. According to recently released HESA data, only Imperial College London has a bigger gap in this leadership pay bracket.

Last year, SU President Megan Croll stood up in front of University Council and talked about the sexist attitudes and behaviours she had faced and seen other women face operating in the University’s leadership spaces. Council recognised the depth of the issue, and mandated the Vice-Chancellor to tackle it.

In the year since, the number of women who are permanent members of the University Executive Committee has halved.

The commitment to change is real, but as a woman who has worked in this environment for the last year, I challenge the University to do better. I know all the leaders of our University believe Durham is a place where all students can equip themselves with the skills and tools to be successful. But their leadership isn’t showing us that, and their culture isn’t making us feel it. We are talking about culture change, but at the same time the University is also talking about reducing their support for providing active bystander training – training that builds the skills to recognise sexual harassment and the sexism which allows those behaviours to be perceived as permissible. It’s not appointing anywhere near as many women to leadership positions as it is men.

The belief and the intent to do better is there. But it must be backed up by actions. A genuine commitment to diversity in recruitment. And a commitment to challenging and changing our institutional culture, by giving us all the tools to call out sexism and harassment wherever we see it.

I am firmly committed to the creation of that better, safer, culture, where the message that we all have the opportunity to succeed goes further than words. I hope that by calling out the clear disparity between the commitments that have been made and the very conscious decisions the University has undertaken, I can set an example of this culture.