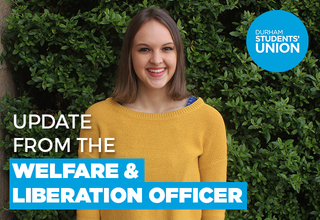 These last few days you may have noticed a pair of giant pins wandering around without explanation. I can finally announce that these pins have been promoting Pincident, a brand new tool to help tackle one of Durham’s most prevalent problems.

Just as these giant pins have been turning up anywhere and everywhere, so can people experience harassment, violence, assault and discrimination throughout Durham. It is an unavoidable fact that not everyone in our community feels safe, and to tackle this fact head on, we need a clearer picture of the problem.

This is why we created Pincident, the idea for which was originally researched and developed by Jo Gower the Community Officer in 2016-17. Pincident is an anonymous mapping tool, which records experiences of harassment, violence, assault or discrimination, as well as incidences of bystander intervention. These incidents appear as pins on a map of Durham, making students’ experiences visible, promoting bystander intervention, and raising awareness of the prevalence of the problem and the need to address it.

The information collected will allow us to identify patterns in this behaviour and understand Durham’s specific situation, which will help us more effectively run campaigns and initiatives to make Durham safer. Pincident has been developed with close involvement from the police, University and council, and we will continue to update these groups upon our findings, so that we can work together to make Durham a city that everyone feels welcome in.

While Pincident doesn’t report incidents to the authorities, it does provide a stepping stone to official reporting by encouraging people to be open about their experiences. The tool provides a list of appropriate contacts, suggesting various methods to officially report an incident, as well as support for those who need it. I hope Pincident will, in allowing people to speak out in an anonymous and unofficial capacity, encourage many to then take the extra step to make a formal report.

The aim of Pincident is not for the pins to discourage people from going into certain areas – in fact, their presence across Durham is probably no surprise to most people – instead we want to make these experiences difficult for people to ignore. The pins will make the point that we need to do something about harassment, assault, violence and discrimination in Durham, and empower victims by visibly recording and acknowledging their experiences.

If you’re unfortunate enough to experience any of this behaviour, please consider making a submission to Pincident. This is just the beginning of an ongoing campaign, which your experiences will be invaluable in developing. With the information Pincident gathers, we’ll be able to better lobby for changes in our city.

Pincident has a longer term aim too. As well as the incidents themselves, Pincident also records incidences of bystander intervention, where people have called out unacceptable behaviour and tried to put a stop to it. These interventions will be marked on the map with a purple pin, encouraging others to act similarly in future. I hope one day we have will be able to paint the map purple.