Update from Megan: #RippedOff at the Durham University Open Days 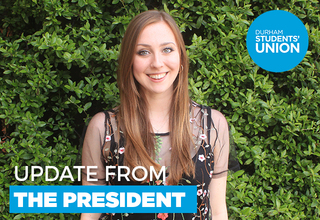 We don’t want anyone blindsided by the cost when they get here, and we want to make Durham better for the future. We love our colleges. We want all Durham students to get the most out of being part of a college, because they are amazingly supportive, uplifting communities. But the cost of living in college has been rising steeply, and financial support isn’t keeping up. It’s no longer something for all Durham students, it’s something for those who can afford to pay the college accommodation fees. That’s not the Durham University we, as students, want.

This is what I, and other student leaders and campaigners from Durham, said in an open letter to prospective students and their parents, which was distributed on flyers at the recent Durham University Open Day. Our President-elect and Postgraduate Academic Officer-elect were handing out the fliers on Saturday, when University security objected, claiming they were staging an ‘unauthorised protest’, threatened to call the police, asked them for ID and then escorted them from the area. Because they were telling people that college accommodation fees have nearly doubled since 2010. Telling people that college accommodation can include rats in the bath-tub, holes in the ceiling and fungi in the corners. That it isn’t good value for money, that the University knows it isn’t, knows students aren’t happy, and is likely to raise fees again next year anyway.

That’s why we chose to provide this information at open days. Just weeks before I had presented a 13 page proposal to the University’s advisory committee on fees, detailing the strong case for and deep student concern over raising fees and outlining why these raises can’t continue. The University provided a whole 59 word response to our 13 pages. I was told the University executive would not be taking advice from the committee (its own fees advisory committee) on the question of raising accommodation fees.

We’ve been fighting this battle through years of successive Presidents, through so much research, so many freedom of information requests, so many papers to different committees and conversations with University executives. We’ve demonstrated the student position and feeling on this through students meetings, petitions, protests, articles in our student media and more.

This year at the final hurdle, knowing the support we had in the room, the decision was taken away from the committee we’d worked so hard to make a strong, evidence based case to. Instead, the decision will be made by the University Executive Committee, which has no student representation, sometime in early July. So over 20 student leaders and campaigners got together, and decided we had a responsibility to let prospective students know what coming to Durham costs. Because too many students have told us about getting here, only to fall under enormous financial pressure, unable to take part in the full Durham experience, or to feel excluded because increasingly few students from lower income backgrounds choose Durham as the cost increases. This feels like a place that isn’t for people like them. This resonates with me so strongly – I came to Durham supported by a level of bursary that’s no longer available, to cover costs which have now increased.

This gap is also impacting our local community. The cost of Durham University college accommodation (which all first years at the University live in) is now more than what the cost of repayments on a mortgage on a two bedroom new build house within the same five mile radius could be. To many living in our local County Durham, they’ll look at those prices (over 30% of the average yearly salary for the County) and get the message loud and clear, that Durham University, the world-class, historic University and the centre of their city, isn’t a place for people like them, and that if they do come here (via scholarships, or family making the massive financial commitment) they’ll come feeling that they’re the exceptions – the outsiders in their own city. How can Durham University truly engage with its community, if the product it’s offering is one they can’t afford?

George, who will be President as of August this year, observed “Rather than attempting to shut down criticism from student representatives, I think the University would be much better off instead addressing the concerns being raised about the affordability of the student experience at Durham.” I couldn’t agree with him more. Ignoring student voice, whether by preventing representatives from handing out flyers, or from moving the conversation from a committee with student representation to one without, just takes us further away from solving a problem that has impacts across our University and community.