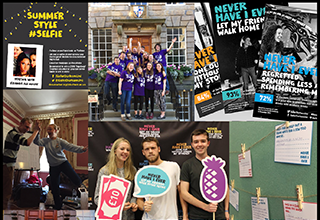 After an extensive audit, we’re pleased to announce that Durham SU and Durham University have been awarded NUS’ ‘Alcohol Impact’ accreditation.

Rosa Tallack, Welfare and Liberation Officer, welcomed the award: “The award recognises our commitment to creating a safer, more inclusive community and a continuing need to address the issues surrounding alcohol culture at Durham. I’m really pleased with the hard work Durham SU and the University has put into tackling these issues, and look forward to seeing this partnership build on this work in the future.”

Bringing together not only the SU and University, but also the valuable contribution from the Durham Drug and Alcohol Recovery Service, the award recognises a real joint effort.

Two key projects that led to qualifying for the award were the University’s ‘Have a Word’ alcohol intervention project and the Students’ Union’s ‘Never Have I Ever’ campaign.

Durham University’s Have a Word scheme involved working with the Durham Drug and Alcohol Service and around 50 key figures in Durham’s student community to adapt the training for students.

‘Never Have I Ever…’ has been an ongoing campaign based on the popular drinking game. Statistics regarding students’ attitudes to drinking were shared across the University, on social media and at pop-up events. The campaign encouraged students never to be “‘that friend’ who’s too drunk to get into the club” and not to leave their friends alone after a night out drinking or let them walk home by themselves.

Following the campaign, independent surveys showed a significant increase – 15% – of students choosing not to walk home alone after a night out.

Celebrating the announcement of the NUS ‘Alcohol Impact’ accreditation, the University’s Pro-Vice-Chancellor, Owen Adams, said: “This award is testament to the excellent work by our University, Students’ Union, and Drug and Alcohol Service to create a positive culture of responsible drinking and, ultimately, a healthier, safer, and more productive student community.”

The accreditation was received following a detailed inspection by NUS-trained student auditors. We’d like to thank the students who volunteered to take part in the audit, and hope they found the experience and training valuable.

You can read the University’s full press release here.

alcohol impact, nus, Never Have I Ever,