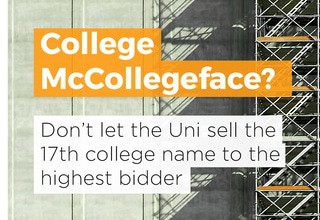 As a Durham alumnus and more specifically an alumnus of our college community, you’ll understand the importance colleges have to Durham students. You’ll probably have called college your home, eaten meals here, made friends here, and have many memories of your time at Durham within our college’s corridors.

But the strong tie between colleges and students is being ignored by Durham University. They are being driven by profit, firstly with the unjustifiable increases in accommodation charges, and now in their decision to backtrack on their promise of student consultation and name the newest college after a ‘substantial donor’.

Instead of listening to the voices of students, as they initially promised; instead of embracing this opportunity to give students a feeling of ownership and pride over their newest college; instead of increasing the diversity of the college community – 13 of 16 colleges are currently named after men; instead of understanding that colleges are not just University buildings but student homes and their naming needs to reflect this, the University are focussed on how much money they can make.

2,800 students signed a petition calling the University to commit to student consultation over this decision and asking that the new college be named after a notable woman with a connection to the North East. There are many impressive suggestions – Mo Mowlam, the first woman to be Secretary of State for Northern Ireland; Margot Fonteyn, Chancellor at Durham University and ballerina with the Royal Ballet; and Elizabeth Barrett Browning, Victorian poet who campaigned against slavery and child labour. These are people who would stand well with existing college namesakes such as the physician Dr John Snow and the railway engineer George Stephenson.

But the University said ‘No’. At Council, only SU President Megan Croll dissented when the decision was made to refrain from naming the 17th college until a ‘substantial donor’ was found. Jennifer Sewel, the University secretary, wrote, ‘In delivering its stewardship responsibilities around the University’s assets, Council has today carefully reconsidered its decision in the light of the protests from some students and staff, but has confirmed that its decision remains appropriate.’ Council acknowledged the strength of student feeling, but prioritised money.

If you feel strongly about this issue, we ask that you add your voice to the debate and sign the petition here. We would also ask you to consider writing to the Vice-Chancellor Stuart Corbridge. If the University won’t listen to its students, perhaps they will listen to the people whose money they are hoping to receive.

Thank you in advance for your support.